Dhanbad is known as the Coal Capital of India. It is famous for coal mining. There are umpteen number of coal mines and coal washeries in this district. Let us revisit the past and know more about mining industry in Dhanbad-Jharia, as it exists today.

History of Mining in Dhanbad:

In early days, the villagers were engaged in mining at a very small scale. Mining on an industrial level commenced sometime during mid 19th century. The mines were ''privately owned'' and were segregated aslarge mines where thousands of workers were employed or small mines with a few hundred workers. Initially, majority of tribals were employed in mining activities. But from 1910 on wards, there was influx of workers from places like Allahabad, Patna and Gorakhpur so that they even outnumbered the local workers by 1950's.This was because local workers worked for a week and then engaged in their fields or other activities to take rest. Half of these workers were women. However, in 1938, employment of female workers in mines was officially prohibited. 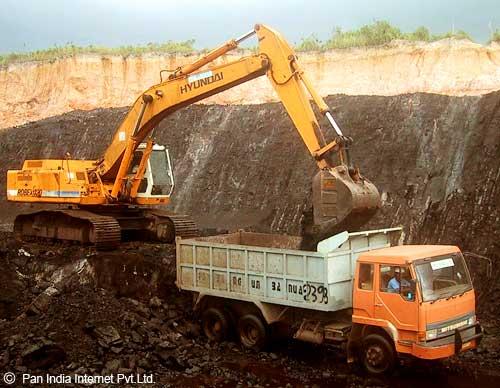 With passage of time, electrical pumps used during rainy season and electrical lights facilitated longer hours of work in open cast mines. But there were sporadic strikes by Trade Unions. During 1930's, three registered Trade Unions were functional in Jharia Coal field:  The Indian Colliery Labour Union, the Tata’s Collieries Labour Association and the Indian Miners’ Association.
Mafia in Dhanbad was quite an intrinsic part of the mining regime during 1970s to 1990s. In 1971, the chief resource for steel production, that is, coking coal collieries were nationalized. By 1973, even the non-coking collieries were nationalized. Later, these were merged into CIL (Coal India Limited) on 1st November, 1975. Nationalization actually demarcated the borderline between so called ''illegal mining sector'' and ''official economy'' more clearly.
Children were employed, small business opportunities or jobs were offered to people by proprietors of these illegal mines and any political party which hinted at closing these, would not win any local election in Dhanbad area. These illegal mines served important purpose in local economy and was also referred to as ''peoples' mines''. Dhanbad was thus synonymous with coal mafia. In some cases, mafia dons who worked as transport contractors or Union leaders, later became politicians.
The ''Jharkhand Movement''  surfaced in 1920s and acquired considerable influence with setting up of JMM (Jharkhand Mukti Morcha) in 1972 by Shri Shibu Soren. These regions have been a witness to the Kol rebellion, the Santhal Rebellion and the Birsa Movement.

The mining areas of Dhanbad-Jharia were part of Southern Bihar before the formation of Jharkhand state on 15th November, 2000.With the advent of international NGOs, shifting of interest of trade contractors to real estate business, re-structuring of mines, expansion of open-cast mining and hiring of mostly contractual workers, there has been drastic change in the mining scene in Dhanbad. However, conflicts and strikes still continue from time to time. Mining, for villagers, has meant pollution and displacement a midst Maoist infestation in the entire region.
The mining of coal goes on even today. Sometimes revisiting the past which was rift with more of darkness than light. However, the future may hold the sheen and sparkle of steel that the black diamond so richly ensures!

Here is a list of mines belonging to various companies in Dhanbad, situated in different areas of this region.