Dhanbad district is located in Chota Nagpur plateau in the eastern part of Jharkhand state between Latitudes - 23° 37'3" N and 24° 4' N and Longitudes  86° 6'30" E and 86° 50' E. It is bound by Giridih district towards the North, West Bengal towards the South, Jamtara towards the East and Bokaro towards the west. It has just one sub-division (Dhanbad) and eight development Blocks. These development Blocks are: Dhanbad, Jharia, Tundi, Nirsa, Govindpur, Katras , Baliapur and Topchanchi. 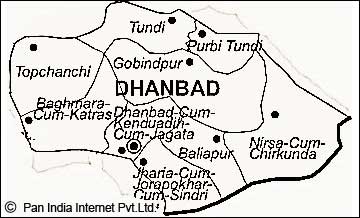 The district is rich in coal and other natural resources. There are a number of mining industries located here which generate employment opportunities for the local population. Tata Steel, BCCL, ECL (Eastern Coalfields Limited) and IISCO have mines for coal-mining, coal washing, and coke making. IISCO (Indian Iron And Steel Company) is now part of SAIL while BCCL and  ECL are subsidiaries of CIL (Coal India Limited). CIL has open cast mines and underground mines. Tata Steel has predominantly maintained underground mines. These companies have constructed comfortable townships for their employees as well.
Dhanbad is the only district in Jharkhand where the industrial employee population is more than the population of those engaged in agriculture. Important crops grown in this region are paddy, maize and wheat. Also, agriculture is primarily rain fed. Other means of livelihood include sericulture, pisciculture (due to presence of two large dams), pig and goat rearing, making bamboo handicrafts etc. Other industries are ceramic, iron and steel, engineering and other ancillary industries.
The northern region of Dhanbad district is covered by forests and the southern area comprises of plains. Important trees found here include sisame, sal, gamhar, mahua, bhelwa and kendu etc. Damodar and Barakar are two significant rivers flowing through Dhanbad district. Katri, Jamunia, Gobai, Khudia and Irji are some other rivers flowing through the district. Dhangi pahar is the highest peak in this area.
Summer temperature ranges from 13°C to 45°C while the winter temperature ranges from 8°C to 34°C. The average annual rainfall is 1270 mm. The climate is generally dry with July and August being the wettest months. Relative humidity is high throughout the year.
Forest cover is over 189 sq. kms. in the district. The entire length of north and north-western division is separated by the Grand Trunk road.

Soils found here have been grouped under three categories: Entisols, Inceptisols and Alfisols. The red soil found here is not too fertile.Water resource may be surface water resource or ground water resource. Geological formations are composed of crystalline rocks belonging to Dhanwar system (Archeans). The coal basin of Jharia is located in the southern half. Major rock groups found are sandstone shale, limestone and gneiss, coal , fire clay and china clay.
The nearby port of Haldia and good connectivity with Kolkata, Patna and other cities have aided the district to become the commercial capital of Jharkhand.