Dhanbad is a city renowned for coal mining. It is a commercial centre and is the base for many public sector, private sector and government undertakings. It comes next to Jamshedpur in terms of urban population. The economy of Dhanbad is dependent upon coal based industries and the district comprises of about 112 coal mining unit. The magnitude of coal based economy can be gauged from the fact that 27.5 million tonnes of coal is produced here and 7000 million rupees worth revenue is generated through this. A number of coal washeries too exist in this district. 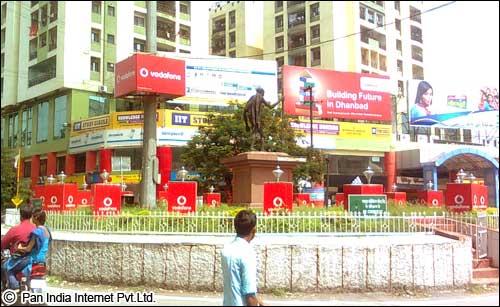 Various industries have constructed townships for the employees to provide them with congenial living conditions, medical assistance and educational benefits. Transport via railways and roadways is satisfactory and aids business in the city. Dhanbad has been included in the freights corridor of Indian Railways. This too has contributed to the economy of this third largest city of Jharkhand.

Another aspect of economy fast developing in Dhanbad is real estate business. However, in 2006, it was counted among most backward districts of India by the Indian government. It is thus receiving funds from Backward Regions Grant Fund Programme (BRGF). Jharia is  famous for coal mandi (market centre) in Dhanbad district and is a mining price index centre.

There are not too many tourist attractions in Dhanbad. However, nearby gateways do make for an interesting holiday trip. A visit to coal mines and washeries is no less a learning experience about ''black diamond''.


Krishi Vigyan Kendra, (KVK: State agricultural department) and ATMA impart on-farm training programmes on organic farming and other agricultural knowhow. The entire district has benefited by ''Hariyali Yogana'' and distribution of quality seeds, fertilizers and pesticides to small  and marginal farmers, thanks to efforts of State government. However, use of technology in farming can encourage better produce. This has also given a green signal to investors to invest in this sector.

For proper sale-purchase of food grains by farmers and wholesalers at appropriate prices, there is an agricultural market complex at Barbadda along with cold storage. There are also many ''rural haats'' serving this purpose. Agriclinics and agribusiness, rain water harvesting tanks have been set up and irrigation infrastructure has been strengthened.

The district comprises of vast tracts of cultivable/uncultivated wasteland. This along with favourable climate, make for a fertile base for growing eucalyptus, sesame, bamboo, ber, jack fruit etc. The numerous Palash trees in this region open the gates of opportunity for lac cultivation. The National Bamboo Mission has been sponsored by Central Government for promoting improved varieties of bamboo, increase its coverage area and promote marketing of bamboo and handicrafts made of bamboo. Animal husbandry, pisciculture and dairy farming are other means of livelihood for rural people as they get good returns with minimum investment. This occupation is carried out in hilly, drought prone and under developed areas by marginal farmers and landless workers.

There is potential for :