Dhanbad is a cosmopolitan city with people of diverse cultures inhabiting together. They have come here for employment in mining organisations from places as far as Gujarat, Punjab, Tamil Nadu, Karnataka, Kerala and Rajasthan. Therefore, myriad languages are spoken in this mining hub.
Some distinguished personalities of Dhanbad are Shri. Pushottam Khimjee Chauhan (freedom fighter), Seth Khora Ramji Chawda (owner of coal mine, a banker, railway contractor and philanthropist), Ram Narayan Sharma (politician who also introduced western mining techniques in Dhanbad mines) and Satya Brata Sinha or Shri S.B. Sinha (former Supreme Court Judge).
The people of Dhanbad believe in working hard and enjoying hard! It is no surprise that they throng around cinema halls during weekends to book a ticket for the latest Bollywood hit or even regional films, for a change. Fame Cinema in Ozone Galleria Mall, Deshbandhu cinema hall, Usha Talkies, Puja cinema hall serve to entertain all age groups. The malls are replete with branded show rooms and the students venture out for window shopping, occasionally  gifting themselves some trendy stuff available there.
For those willing to go for a holiday, nearby gateways like Jamshedpur (162 kms.), Bokaro (49 kms.), Ranchi (176 kms.), Kolkata (271 kms.) serve the purpose well. These places have colossal malls, brimming markets and noteworthy temples. For instance, Parasnath temple is 63 kms. from Dhanbad while Shakti mandir  which houses an ''Akhand jyoti'' is situated in the heart of Dhanbad city.

The brilliance about the culture in Dhanbad lies in the fact that people belonging to various regions of India live in harmony and celebrate diverse festivals with pomp and gaiety. Among the main festivals are Vishwakarma Puja, Saraswati Puja, Durga Puja, Chhath, Deepawali, Holi, Eid, Moharram, Gurupurnima, Sarhul and Christmas etc.

The languages spoken by people here include Hindi, Punjabi, Telgu, Santhali, Malyalam etc. as people belong to various regions of India and have settled here to work in the various mines. However, English is the language used for routine communication in offices.

Art and Craft of Dhanbad: 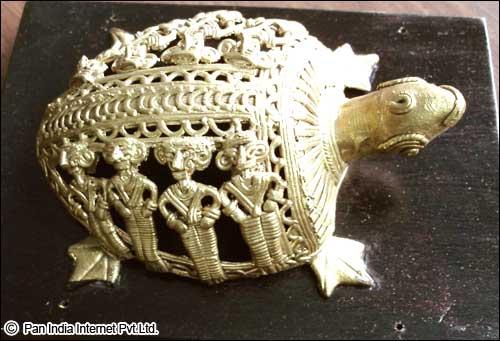 Most of the indigenous people have found employment in mines or are engaged in agriculture. Some have also taken to traditional crafts which include wood craft, bamboo craft, paitkar paintings, stone carvings, make wooden toys and artificial jewelry. The festivities in villages utilize traditional musical instruments such as dohari, domkach, mardana jhumar, daidhara, janani jhumar, pawa, jhumta, faguwa etc. Mandals 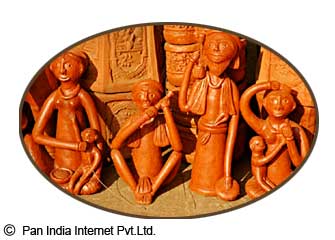 and singas are traditional drums used in folk music and dance.

The Archaeological Survey of India has led many excavations in areas around Dhanbad, Bokaro and Ranchi to explore the past socio-cultural pattern of society and collect data on cultural heritage of the state.